The Failure of Bail Reform State By State

The Failure of Bail Reform State By State

As the bail reform movement moves past its crescendo, this gives us an opportunity to assess how things are going. Initially, the people advocating change claimed that the current bail system in the United States was unconstitutional. Therefore, they argued that changes had to be made because the courts were going to get rid of it. In the intervening period, the only two reported cases to date from the United States Court of Appeals for the Fifth Circuit and the Eleventh Circuit have ruled just the opposite. They have concluded that monetary bail is constitutional. As a result, the arguments supporting change have now shifted to arguments that “this is the right thing to do.” However, they are not arguing that it is the right thing to do for tax payers, the States or the Criminal Justice System, which should always be primary considerations.

The booklet is a 15 page collection of case studies (click image to read) from around the country highlighting the results of several attempted state specific bail reform efforts. In some cases, the results have been bad enough to cause the jurisdiction to repeal the changes. While each state discussed is unique, the results are hauntingly similar. From promises of less crime, less time in jail and lower jail populations, to the realities of more crime, more time in jail and larger jail populations, states have been left to fend for themselves. No longer can they afford to wait for more resources or time for these programs to start living up to their empty promises. Instead, states are looking for ways to roll back and rethink these ineffective and underwhelming bail reform policies. 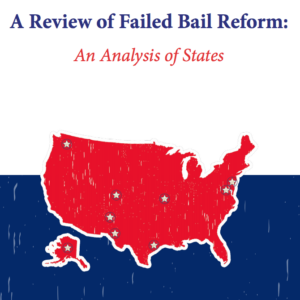